The item Apricot Jade Ovals is currently unavailable.
Take a look below for similar items.

Our drilled Jumbo Turquoise Slices offer an exciting way to add variety to your drops wardrobe..wear them alone or as backdrops. Shapes and colors will vary. Approximate length: 1.5" Shown on our Large Narrow Beaded Hoops (sold separately) with our Apricot Jade Ovals (sold separately). To view more hoop styles: see hoop options A portion of the proceeds of your purchase will benefit tewawomenunited.org/ 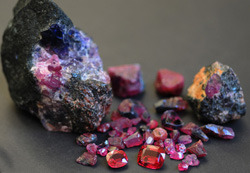 The Candelaria Mine in Nevada is the source of the very fine stones in these slim 18kt ovals, topped with flashing diamonds .10 ctw. Approximate length: 1" Shown on our Ribbon Hoops (sold separately). To view more hoop styles: see hoop options A portion of the proceeds of your purchase will benefit tewawomenunited.org/