Skip to Content
CALL 800.784.0038
We are back in the store to serve you!
During Phase 1 of re-opening, our staff will be in the store Monday through Friday 11- 4. We will be offering phone and web orders with facetime or zoom video consultations upon request. Curbside pick-up is available. Thanks for your patience and know that our priority is to meet your needs in the safest way possible. Please call us with any questions or just to say hello. We miss you!
Phone – 800-784-0038 or 505-984-0040Thank youThe Golden Eye 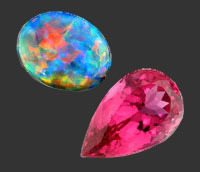 Water, sky, fire, and rainbows...all of these elements of nature seem to be embodied in the magnificent opal. The opal is October's birthstone. The Australian aborigines tell the story of the Creator coming down to earth from heaven on a rainbow to bring the message of peace to humans. Where his feet touched the ground, it became alive with opalescent color. It is a fact that 95% of the world's opals are mined in the outback of Australia. Opals are composed of a mineraloid gel, a mineral-like substance that does not demonstrate crystallinity as most gems do. Deposited in rock fissures, such as limonite, sandstone, or basalt, the small spheres of gel cause interference and refraction manifestations, resulting in the unique color play of the opal. The opal is made up of at least 3% water, but can have a water content as high as 20%. It can become brittle when stored dry, and the color play may pale when exposed to heat for a long period. It is best to wear your opals regularly. They need to absorb the humidity from the air and the skin. They are rated a 5.5-6 on the Mohs scale, so caution is needed in order to avoid stress and abrasion to the stone. Ethiopian Hydrophane opals have a different relationship with humidity and oils. They are happiest when they have less contact with skin oils and perspiration. The tourmaline is also recognized as a birthstone for October. It may be a good alternative for the person who wants to wear their jewelry a little harder . The tourmaline is 7-7.5 on the Mohs scale, making it a very durable stone. The word tourmaline means "stone with mixed color." They are found in nature in virtually every hue of the rainbow, often with multiple colors in the same stone. The watermelon tourmaline, with three distinct colors, is one of the most fascinating specimens. Mined mainly in Brazil and Africa, tourmaline is one of the most utilized stones in jewelry today. Rubellite describes a deep red tourmaline, Paraiba, an intense blue green, and Canary, a golden yellow. No two tourmalines are exactly alike, making them a perfect choice for one-of-a-kind pieces. Legend has classified the tourmaline as the stone of love and friendship, rendering them firm and lasting.

This is an 18kt gold Shaka Coin replica; the original coin dates from the 4th century, from a kingdom that was located in present day Afghanistan, Pakistan, and western India. One side bears the image of a king, presumably Shaka, and the other side depicts Ardoxsho, Goddess of Abundance. The pendant is bezeled, beaded, and bailed in 22kt gold...the king side is embellished with regal red spinels .89 ctw...the Ardoxsho side, with radiant blue moonstones 1.2 ctw. Chain sold separately. See chains YOU have to guess which Elizabeth! A buttery, oval sapphire 4.04 ctw., brimming with old world charm, is flanked by two tangerine sapphires .04 ctw...sugary white diamonds .41 ctw. are wrapped around the bezel and shank for a palatial finish. 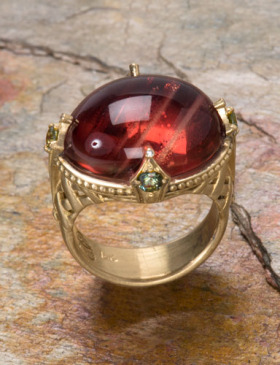 Sunstone is a feldspar crystal formed in molten lava and then discharged onto the surface of the earth by a volcano. This particular sunstone 17.4 cts. contains shimmering striations that add to its spectacular interior landscape. The rich reddish orange cabochon is accentuated with four glittering green sapphires .56 ctw. and seated on a throne of latticed 18kt gold. A truly original piece. Two lovely Tahitian pearls sitting side by side, the tallest one actually having a diamond set in its top. Pave white diamonds embellish the sides of this unique band. Size 6.5. Montana Blue Sapphire Be Mine Ring

A teal Montana sapphire enchants with unusual color and sparkle in a minimalist 18kt gold setting that can be dressed up or down.

One of Norah's favorite carved rings...wear it for instant light-heartedness.

This splendidly carved creation in 18kt gold is set with a fine line of white diamonds...it will take your breath away.

A sleek, pear-shaped aquamarine 1.87 cts. resides in a platinum bezel on a satiny 18kt gold frame and shank...like butter! 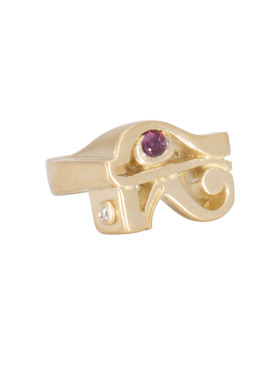 Are you crackin' up for lack of stackin 'up? Well, we've got the solution for you right here in 18kt gold: Gorgeous, glittery multi-colored sapphires, a demantoid garnet, a diamond, and a purple sapphire cabochon 3.59 cts. add up to a fine display. 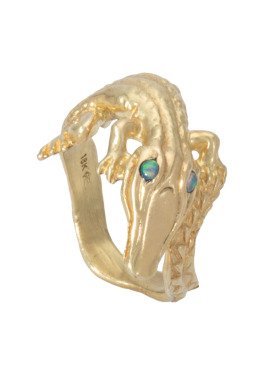 Annie Alligator is handcrafted from 18kt gold and has dazzling opal eyes. She is sure to amuse and enchant the wearer. Current size: 5

We are swooning over the 18kt gold Aquamarine Guinevere Ring with its breathy, shimmering baby blueness. Don't wear it when you're driving...you won't be able to keep your eyes on the road! 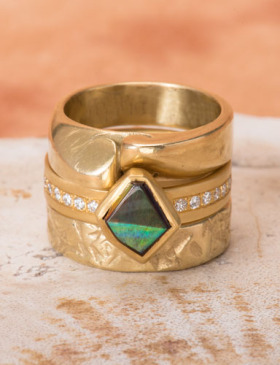 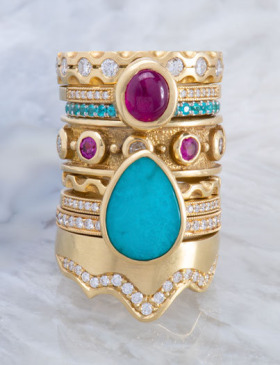 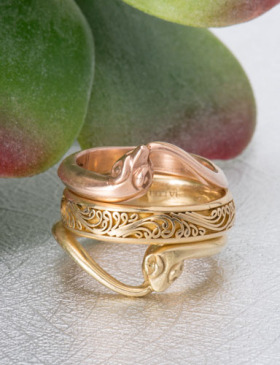 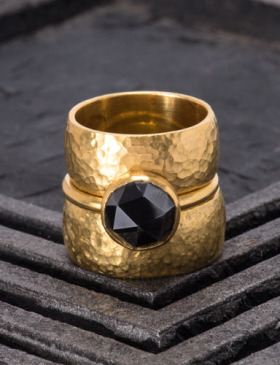 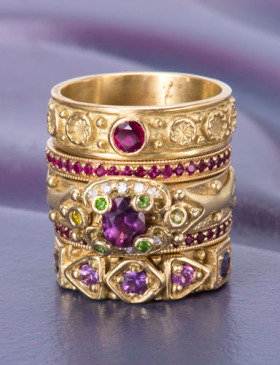 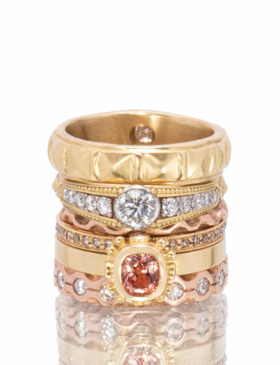 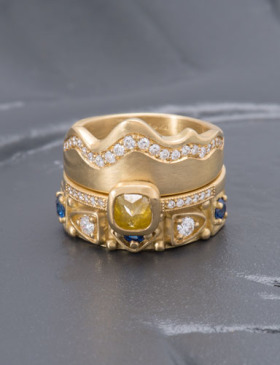 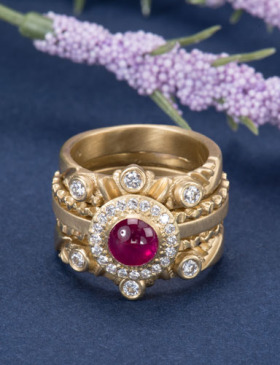 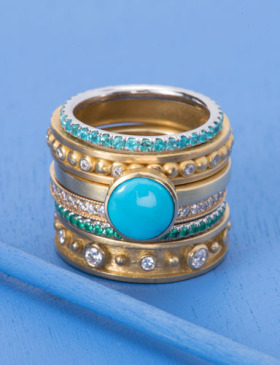 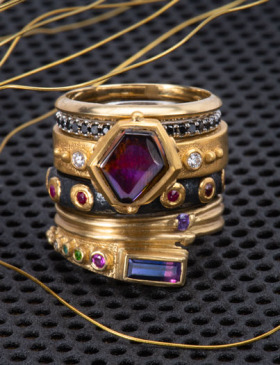 One of the prettiest champagne diamonds EVER .55 ctw. perches in the center of a sparkly diamond studded .07 ctw. hive on a satiny tapered 18kt gold shank...how could you resist? Why should you resist? Call for availability.

Waves of diamonds drift across these lovely Snow Drift Bands. Their gentle sparkle is reminiscent of the snowcapped Rockies. It is the most comfortable ring you will ever wear! 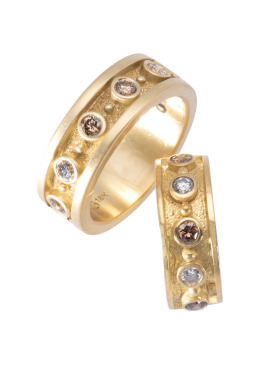 Simple and elegant, these 18kt yellow gold bands can be set with a multitude of stones. This duo is shown with purple sapphires and brown diamonds. The Etruscan Treasures Ring is identical in style to Venus II except five stones are set on top of the band instead of all the way around. Size 9 and above, please call for pricing. Our Serpentine Coil Band is shown with a .48 ct. rose cut diamond. It stacks beautifully and also works well as a stand alone. The coils of the ring are adorned with little white diamonds and gold beads. Current size: 6.75 Shown with diamond baguette band. (NA) 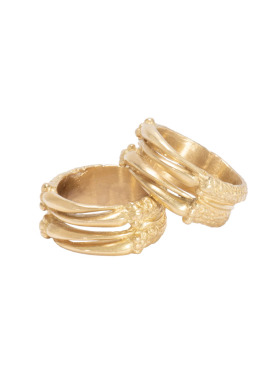 A striking reminder of the natural world, the 18kt gold Double Eagle Talon Ring will hold you in its fierce embrace.

One of our most revered designs, the Diamond Vesta Band .80 ctw. is substantial enough to stand alone and is also a strong performer in a stack-up. This ring can be made in 18kt yellow, rose, or white gold and set with white or brown diamonds (prices will vary). Size 9 and above, please call for pricing. Shown with 18kt gold Pie Crust Variety Bands (sold separately).
« Previous 1 2 3 4 Next »